Week 3 was our first losing week of 2016 and as I mentioned not getting the best of the number cost me in 3 separate games. While I understand its part of the game and know I had some great luck earlier it is hard not to be a little bitter when you see the score fall on a number that was available at diff parts of the week. This week I have tried to be better prepared to get good numbers early but did miss that Cleveland +9.5 that was their on Monday.

This is the early game in London and I had a tough time deciding between the total and side. I like the Jags but not sure there is any value at +2. The total I think is the play because the Jags offense so far has simply not been able to capitalise on their opportunities and this feels like the perfect defense to get right against.

The Jags offense through 3 weeks has scored only 18 points per game on offense after scoring 22.5 last season, the offense is 30th in DVOA to start this season after finishing 21st last season and their yards per point is up to 17.6 this year compared to 14.4 last year.

After playing the Packers (10th in defensive DVOA), Ravens (5th in Defensive DVOA) and even the Chargers (16th in Def DVOA) the Jags get easily the worst defense they have seen this season and I think we can expect their best offensive performance so far.

This is the Jags 4th trip to London which should make them very comfortable in this game, they understand the schedule, the travel and should be able acclimate quickly in this game. A best case scenario for our over would be the Jags jumping out ahead early and the Colts needing to put up points late to come back. We should also remember that in their last meeting in Dec 2015, the Jags put up 51 vs the Colts.

This is definitely this week’s “Hold your Nose game” and my fav bet of the week.  Denver is 3-0 and the defense looks to be very similar to last years dominant unit, add to that they are coming off of a very impressive win on the road vs the Broncos  where Trevor Siemian passed for 4TDs. Now contrast that to the Bucs who have lost 2 straight games both in very disappointing fashion so yeah why wouldn’t you want to bet Denver at this short price? Well it turns out everyone does want to. Here is an alert I earlier this week. 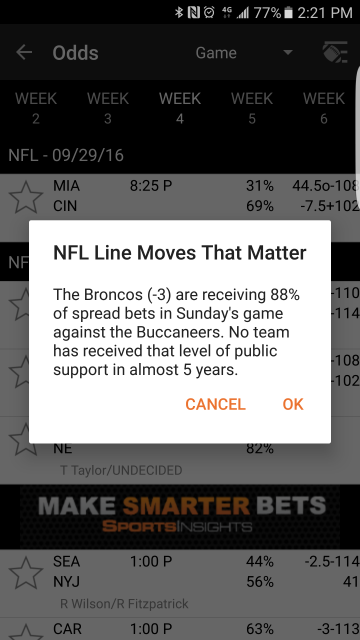 On Wednesday on ESPN’s beyond the Bets podcast, Bob Scucci, the Director of race and Sports for Boyd gaming said the ticket count at his casino for this game was 12-1 for Denver. Yet as of Friday this line has stayed at 3, why? Clearly the books are ok taking all those tickets on Denver either because there is big money coming in on TB or because the house is fine taking a big position on the Bucs.

I agree with TB side because I think that the Denver offense is being overrated based on the Trevor Siemian game in Cincy. By the numbers he was very good, 8.9 Yards per pass, 4TDs 0 Ints and a passer rating of 132 but if you go back and look at some of those throws the D.Thomas throw as severely underthrown, as was the first Sanders TD and he got lucky on a couple of dropped INTs. Going into last week’s game, Siemian had passed for 1 TD and 3Ints and one for those games was against the Colts who have a bottom 3 pass defense.

One area TB has been good so far this season is vs the run, they are giving up 3.5 yards per att through the first 3 games  and if they can make Denver 1 dimensional I think there is a good chance we see a rough game from Simien.

On the flip side, the Denver defense though overall very good, they are being run on giving up 4.7 yards per rush to start the year 30th in run defense DVOA, look for the Bucs to get Simms going early and then use play action to get Evans and the receivers involved. I think  there is a good shot that TB wins this straight up but would love to get 3.5.

*As of Sunday morning this line dropped to 3 or 3.5 with the news that Brissett would be starting at QB.Obviously this means I got a gift at +7 yesterday but I still like Bills +3.5 if that is available. A lot of the reason to bet the Bills in this case are the same

The Patriots are 3-0 without Tom Brady and we have now reached a point where even without fully knowing who will start at QB or how healthy either option is the patriots are a full TD favourite and getting 70% of the bets. It certainly looks like it will be Jimmy Garopollo starting but it is hard to imagine he will be 100% coming off of his shoulder injury, you are not going to get rich betting against Belicheck but if there is one scenario where you can make money its when he is favored by a TD or more.

Despite being 3-0 the Patriots are only 12th in DVOA overall, 11th on offense and 24th on defense. They should get Gronk looking closer to what we expect but still we haven’t seen it and I think it’s a lot to expect Garopollo to carry the offense without a full week of practice and being less than a 100%. Buffalo is 17th overall in DVOA, and 12th on defense after last weeks performance against the Cardinals, they did look terrible in week 2 but if they can repeat the performance of week 1 and 3 they should be able to keep the Pats offense in check.

I’m not sure the Bills are going to be any good this season but we know these Patriots games are always circled on Rex Ryans calendar. Last year the Bills lost both games to the Patriots by 1 score (8 and 7) but of course those were games with Brady and Gronk.

7 points just seems too much in this spot, so far we have seen the Patriots results outperform their actual performance in the first 3 weeks and I’m not sure we can expect that to continue. Tom Brady comes back next week, the Patriots already have 3 wins in the bank if they are going to have slip it is likely here.

I haven’t played any totals this year because I do try to rely on season stats for these and through 2 weeks I just don’t feel comfortable with them. This one jumped off as a pure under as both these teams are among the best defenses in giving up offensive points, Titans are 4th giving up just 14 points per game and the Texans are 8th giving up 17.7 offensive points.

On the flip side these are 2 of the worst scoring offenses ranking 28th and 29th in the entire league with both offenses scoring under 15 points per game. Both teams want to run the ball even though neither has been very efficient, which means the clock should keep moving but we probably won’t see a lot of big runs that change the field.

The Texans have really struggled on offense, 32nd in DVOA, and the Titans defense has really carried them so far, I expect the Texans defense to improve with JJ Watt out this week, Watt who is unquestionably the best defensive player the last 3 or 4 years was simply too injured to be effective this season, and the Patriots really targeted him in the run game last week.

Its certainly possible that this game has some big plays from the defense that lead to easy scores and this game goes over but its one that I think you have to play because 7 or 8 times out of 10 I should go under.

This is a late add on Sunday morning as i saw some -3s pop up, I liked the Ravens but didn’t trust the offense enough to give the hook. The Ravens are looked at as the least impressive 3-0 team so far and in this game we see the public not wanting to back them with less than 40% of bets.

The Raiders are playing their 3rd road game in 4 weeks, their 3rd trip east and this one is an early start. Last week the Raiders played a very good defense in Tennessee and were able to survive and win with just 17 points. I was on the Raiders last week because I didn’t think the Titans would be able to take advantage of the Raiders big weakness on defense early this season, their pass defense. The Titans pass offense has not been very reliable and despite almost 400 yards of offense, the Titans had 3 turnovers and just couldn’t score.

The week the Raiders play the best defense they have faced so far, the Ravens are ranked 5th and will provide a huge test for the #2 ranked raiders defense. The raiders offense has faced 2 of the worst defenses in the league so far the Saints and Falcons so this will be a real indicator of what the offense can do against a top defense.

On the flip side, the Ravens pass offense hasn’t been very efficient (26th in DVOA) but have been able to find big plays to Mike Wallace who has 3 TDs in his first 3 games. This game should get the Ravens some opportunities to get their other receivers involved and I think they do just enough here with the Raiders in a bad schedule spot (3rd trip east in 4 weeks, play big division game at home next week vs SD).