The Plinko Gods Giveth and the Plinko Gods taketh away. Last week in a really big week, there were 3 close games that could have gone either way and all went mine, this week there were 4 Sunday games that all looked good in the 4th Quarter and all 4 ended up going the wrong way. The 2 prime time games helped salvage the week and save me from disaster but not enough to save me from a terrible Sunday morning that felt like a kick in the mouth. 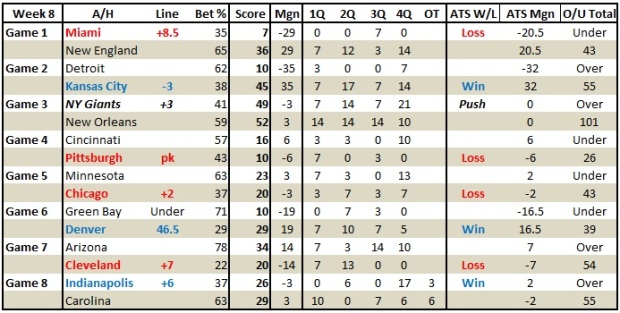 What Did We Learn:

The game I am most upset about betting was the TNF Dolphins- Patriots game. While Miami had come in with 2 huge wins they were over the Titans and Texans, 2 teams that have been a mess all year and now we had a matchup between Dan Campbell and Bill Bellicheck on a short week with NE at home. This should have been a no play, we had no real indication of how Miami would look against a great team and the coaching mismatch was so large that really this one was just a hope and prayer. Taking a rookie coach, especially one who has never been a head coach before vs an all-time great on a short week is just a bad bet. I think in situations where you have either extra time to prepare or an extra short period of time to prepare these types of coaching mismatches matter more.